Golang has to be installed before you can build.  The commands below show how to clone from GitHub and build a Keyhole executable:

I provide a build.sh script to build Keyhole on macOS or Linux.  Simply run the script:

I encourage you to use the script to build.  It’s easier for me to debug based on the included version number if a reported bug ever comes to me.

To my surprise, it was not as easy as I thought for many users to build Keyhole executables.  How about Windows executable?  So, I improved the script to build for three different platforms, and they are macOS, Linux, and Windows, respectively.  The command is:

The outputs are created under the dist directory.

Below is the command to build Keyhole v1.0.5 from a Windows command terminal.

The above command will output an executable, keyhole, in the current directory.  The version number is stored in a file, named version.

I used to make Keyhole executables available to download from GitHub.  After I retired my Jenkins, I began using Docker Hub for my CI pipeline and no more executables were available from GiHub.

If you have Docker installed, the latest Keyhole executables can be downloaded from Docker Hub using the scripts/download-from-docker.sh script.  The script only has a few lines, see below:

Nothing is straightforward on Windows if it can’t be double-clicked.  To download from a Windows computer, it’s not as simple as I first thought.  First of all, after installing the Docker engine, switch to Linux containers mode.  The switching to Linux containers may fail if your hypervisor doesn’t support it.  Once you pass the Docker installation and configuration, creating a Keyhole instance before copying the file.  Below is an example of the commands I ran:

The build and download steps are simple enough if one can overcome the prerequisites such as installing Golang and/or Docker.  Short blogs about the uses of Keyhole come next following this post.  Keyhole was actively developed and thus made previous posts somewhat outdated.   Check out Survey Your Mongo Land and Maobi - Reports Generator for Keyhole next to begin evaluating MongoDB performance using Keyhole.

Torsten said…
This powershell ps1 script saves some copy/paste and stores the keyhole exe in C:\MongoDB: 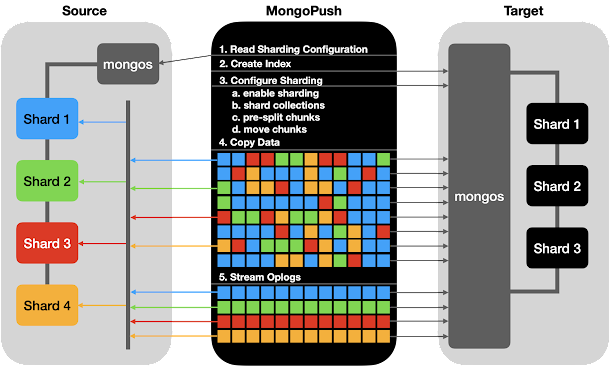 MongoPush tool is another bold stroke in my serendipitous MongoDB career. It is a push based migration tool for MongoDB clusters. It provides high parallelism, supports topology transformation, is resumable, offers progress monitoring, and supports migrating subsets of data.  With MongoDB Atlas gaining popularity and the success of the Keyhole , I was frequently asked whether a migration feature can be added to the Keyhole. The other existing migration solutions often fail because of firewall restrictions or other limitations.  Keyhole serves a different purpose as an analysis tool, so rather than confuse its function, I created MongoPush as a separate tool.  Push-Based Solution My goal was simple, to develop a tool that can perform a sharded cluster migration when the Atlas Live Migration Service is not suitable.  MongoDB provides the mongomirror tool to push data to MongoDB Atlas from behind firewalls, but mongomirror can only migrate data between replica sets. It does not yet p
Read more